Why it’s a concern, is the RBA running out of ammo & what it means for investors? Dr Shane Oliver Head of Investment Strategy and Chief Economist AMP Capital

Surprisingly weak Australian inflation has led to expectations the Reserve Bank will soon cut rates. But what’s driving low inflation? Is it really that bad? Why not just lower the inflation target? Will rate cuts help?And what does it mean for investors?

Inflation surprises on the downside again

Australian inflation as measured by the CPI was flat in the March quarter and up just 1.3% over the last year. Sure, the zero outcome in the quarter was partly due to a nearly 9% decline in petrol prices and they have since rebounded to some degree. And high-profile items like food, health and education are up 2.3%, 3.1% and 2.9% respectively from a year ago. But against this price weakness is widespread in areas like clothing, rents, household equipment & services and communications. 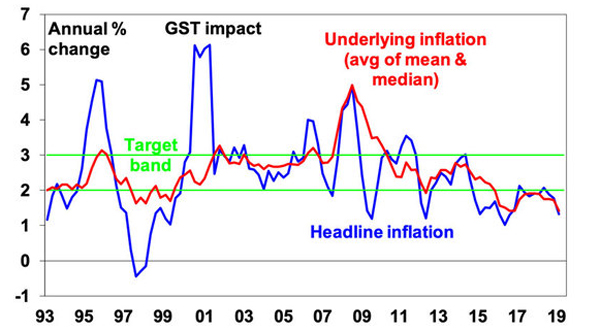 But why the focus on “underlying inflation”?

The increase in the CPI is the best measure of changes in the cost of living. But it can be distorted in the short term by often volatile moves in some items that are due to things like world oil prices, the weather and government administered prices that are unrelated to supply and demand pressures in the economy. So, economists and policy makers like the RBA focus on what is called underlying inflation to get a handle on underlying price pressures in the economy so as not to jump at shadows. There are various ways of measuring this ranging from excluding items like food and energy as in the US version of core inflation, to excluding items whose prices are largely government administered to statistical measures that exclude items that have volatile moves in each quarter (as with the trimmed mean and weighed median measures of inflation). Right now they all show the same thing ie that underlying inflation is low ranging between 1.2% to 1.6% year on year. The average of the trimmed mean and weighted median measures is shown in the previous chart and is averaging 1.4%. The common criticism of underlying inflation that “if you exclude everything there is no inflation” is funny but irrelevant. The point is that both headline and underlying inflation are below the RBA’s 2-3% target and this has been the case for almost four years now.

What is driving low inflation? 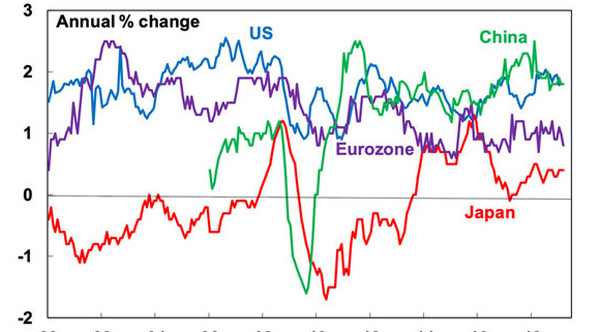 Several factors have driven the ongoing softness in inflation including: the sub-par recovery in global demand since the GFC which has left high levels of spare capacity in product markets and underutilisation of labour; intense competition exacerbated by technological innovation (online sales, Uber, Airbnb, etc); and softish commodity prices. All of which has meant that companies lack pricing power & workers lack bargaining power.

Why not just lower the inflation target?

Some suggest that the RBA should just lower its inflation target. This reminds me of a similar argument back in 2007-08, when inflation had pushed above 4%, that the RBA should just raise its inflation target. Such arguments are nonsense. First, the whole point of having an inflation target is to anchor inflation expectations. If the target is just raised or lowered each time it’s breached for a while then those expectations - which workers use to form wage demands and companies use in setting wages and prices - will simply move up or down depending on which way inflation and the target moves. And so inflationary or deflationary shocks will turn into permanent shifts up or down in inflation. Inflation targeting would just lose all credibility. Second, there are problems with allowing too-low inflation. Most central bank inflation targets are set at 2% or so because statistical measures of inflation tend to overstate actual inflation by 1-2% because statisticians have trouble actually adjusting for quality improvements and so some measured price rises often reflect quality improvements. In other words, 1.3% inflation as currently measured could mean we are actually in deflation. And there are problems with deflation.

Deflation refers to persistent and generalised price falls. It occurred in the 1800s, 1930s and the last 20 years in Japan. Most people would see falling prices as good because they can buy more with their income. However, deflation can be good or bad. In the period 1870-1895 in the US, deflation occurred against a background of strong growth, reflecting rapid technological innovation. This can be called “good deflation”. However, falling prices are not good if they are associated with falling wages, rising unemployment, falling asset prices and rising real debt burdens. For example, in the 1930s and more recently in Japan. This is “bad deflation”. Given high debt levels, sustained deflation could cause big problems. Falling wages and prices would make it harder to service debts. Lower nominal growth will make high public debt levels harder to pay off. And when prices fall people put off decisions to spend and invest, which could threaten economic growth. This could risk a debt deflation spiral of falling asset prices and falling incomes leading to rising debt burdens, increasing defaults, spurring more falls in asset prices, etc.

The problem for RBA credibility?

The problem for the RBA is that inflation has been undershooting its forecasts and the target for several years now. The longer this persists the more the RBA will lose credibility, seeing low inflation expectations become entrenched making it harder to get inflation back to target and leaving Australia vulnerable to deflation in the next economic downturn. 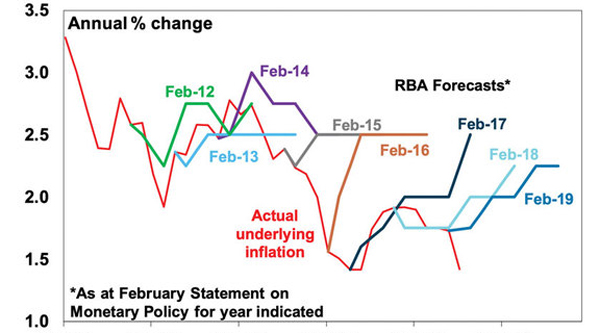 Due to the slowdown in economic growth flowing partly from the housing downturn we have been looking for two rate cuts this year since last December. We had thought that the RBA would prefer to wait till after the election is out of the way before starting to move and coming fiscal stimulus from July also supports the case to wait as does the still strong labour market. However, with underlying inflation coming in much weaker than expected the RBA its arguably too risky to wait until unemployment starts to trend up. And the RBA has moved in both the 2007 and 2013 election campaigns. So, while it’s a close call our base case is now for the first rate cut to occur at the RBA’s May meeting. Failing that, then in June.

Will the banks pass on RBA rate cuts?

This has been an issue with all rate cuts since the GFC due to a rise in bank funding costs. But most cuts have been passed on largely or in full (the average pass through since the Nov 2011 cut has been 89%), notwithstanding out of cycle hikes. Short term funding costs have fallen lately pointing to a reversal of last year’s 0.1 to 0.15% mortgage rate hikes or at least the banks having little excuse not to pass on any RBA cuts in full.

Some worry that rate cuts won’t help as they cut the spending power of retirees and many of those with a mortgage just maintain their payments when rates fall. However, there are several points to note regarding this. First, the level of household deposits in Australia at $1.1 trillion is swamped by the level of household debt at $2.4 trillion. So the household sector is a net beneficiary of lower interest rates. Second, the responsiveness to changes in spending power for a family with a mortgage is far greater than for retirees. Third, even if many with a mortgage just let their debt get paid off faster in response to falling rates this still provides an offset to the negative wealth effect of falling house prices, reducing pressure to cut spending. Fourth, the fall in rates since 2011 has helped the economy keep growing as mining investment collapsed. And of course, RBA rate cuts help push the $A lower. So, while rate cuts may not be as potent with higher household debt levels today and tighter bank lending standards, they should provide some help.

Is the RBA out of ammo?

This is a common concern around major central banks. However, they are a long way from being unable to do anything: the Fed can reverse the 9 rate hikes seen since December 2015 and start quantitative easing again if needed; and both the ECB and Bank of Japan could expand their QE programs. The ultimate option is for central banks to provide direct financing of government spending or tax cuts using printed money. This is often referred to as “helicopter money”. Fortunately, non-traditional monetary policy has worked in the US and so at least these concerns are unlikely to need to be tested. Of course, the RBA still has plenty of scope to cut interest rates if needed (there is 150 basis points to zero) and it could still do quantitative easing if needed so it’s a long way from being out of ammo (not that we think it needs to do a lot more anyway).

There are a number of implications for investors. First, low interest rates will remain in place for some time keeping bank deposit rates unattractive. Second, given the absence of inflationary pressure, a 1994-style bond crash remains distant.

Finally, as can be seen in the next chart, low inflation is generally good for shares as it allows shares to trade on higher price to earnings multiples. But deflation tends to be bad for shares as it tends to go with poor growth and profits and as a result shares trade on lower PEs. The same would apply to assets like commercial property and infrastructure.

Low inflation can allow higher PEs, but maybe not deflation 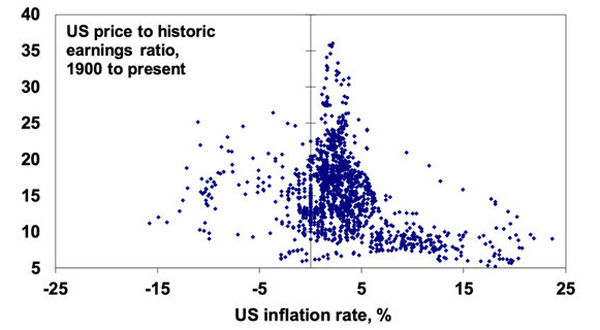