– what does it mean for investors? Dr Shane Oliver - Head of Investment Strategy and Chief Economist, AMP Capital 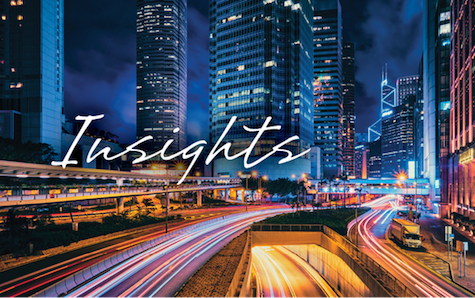 - The absence of significant macro policy differences between the new Labor Government and the Coalition suggests minimal impact on the share market & the $A.

- There could be some short-term uncertainty if Labor has to rely on minority parties or independents, but its looking like Labor will be able to govern in its own right.

Australia has a new government

The ALP won the election and is set to Govern most likely in its in own right or as a minority government. Following its loss in the 2019 election which was partly blamed on a “radical” tax & spend agenda, the ALP adopted a “small target” approach this time, so its economic policies are not significantly different to those of the outgoing Coalition Government. However, there are still some areas of difference and uncertainty. This note looks at what is expected in terms of policies and implications for the budget, economy & investment markets.

Based on their election platform, key economic policy changes under the Labor Government will include the following:

Like the Coalition the ALP is largely looking to repair the budget by growing the economy rather than austerity. The new Government’s pre-election costings suggest extra spending of $18.9bn over the next four years offset by $11.5bn in saving to be from taxes on multinationals, a crackdown on tax avoidance and a cut in public sector spending. This will add an extra $1.9bn pa to the deficit. The table below compares the Coalition Government’s budget deficit projections for the next four years with the deficit under Labor’s policies. The ALP is also talking of $52bn in “off budget” funds (eg, the Housing Australia Fund) which will add to gross debt. The addition to the deficit is only 0.1% of GDP pa though and it should also be noted that if the improvement in the budget numbers since March due to higher commodity prices and lower unemployment continues then the deficit numbers could be much lower. Prior to the election the new Treasurer said he would give a statement updating the outlook in June and a new budget in October.

At a fiscal policy level, the differences versus the Coalition are trivial. The new Government looks inclined to allow a higher spending and tax share of GDP but note that the spending share is already projected at record levels under the Coalition. However, Labor faces big challenges in an era of higher inflation & interest rates and in relation to housing affordability.

The pivot in the economy to higher inflation poses a big challenge to the complacency around the budget deficit, much as the changed environment made life tough for the Whitlam Government in the 1970s. The days of low inflation and low bond yields allowing big budget deficits and high debt are likely behind us. This argues for a faster reduction in government borrowing (whether its “on” or “off budget”) to take pressure off inflation and interest rates and for more policies to boost productivity. And while new Treasurer Jim Chalmers has indicated a preparedness to undertake “budget repair” via a spending audit, this may not be enough if the fast-growing health and social services areas are protected. This in turn could see a return to some of the proposed 2019 tax hikes.

And without productivity enhancing reforms it’s doubtful that the 1.5%pa productivity growth assumption underpinning the March Budget can be achieved, which would mean waning growth in living standards and higher inflation. It also makes it harder for the Government to encourage higher wages without risking a wage price/spiral. Labor policies to boost childcare and use of lower cost sustainable energy will likely help in this regard but in the absence of significant tax, industrial relations, education and competition reforms it’s doubtful they will be enough.

As with the Coalition’s policies the new Government’s housing policies are more focussed on boosting demand – notably the expansion of low deposit schemes and the Help to Buy Scheme – which will result in higher than otherwise home prices. However, the construction of 30,000 social homes combined with the National Housing Supply and Affordability Council if appropriately focussed on boosting supply have the potential to help improve housing affordability. Its marginal though. The main impact on home prices will likely from come rising interest rates (which would have occurred whoever won the election) which we see driving prices down by 10-15% over the next 18 months and may prove to be a headwind for prices thereafter.

Since the 1980s there has been a tendency for Australian shares to rise after elections, as uncertainty is removed. 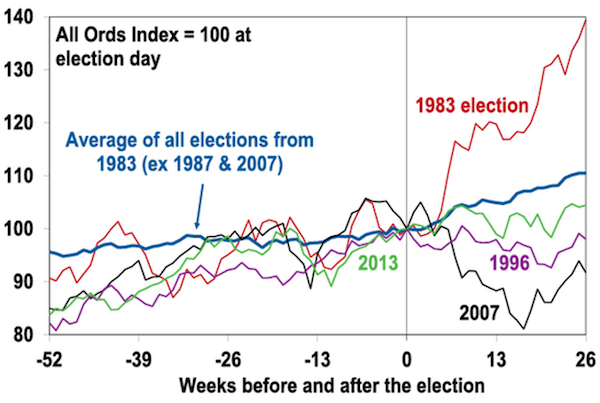 The next table shows that 3 months after the last 14 elections the share market saw an average gain of 4.5%. 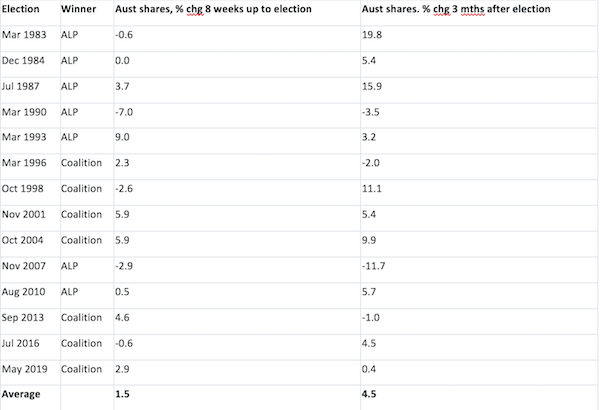 Based on All Ords index. Source: Bloomberg, AMP

Since WW2 Australian shares have performed better under Coalition Governments, although the Whitlam and Rudd/Gillard Governments had the misfortune of severe global bear markets and the reformist Hawke/Keating period saw the strongest returns of any post war government. 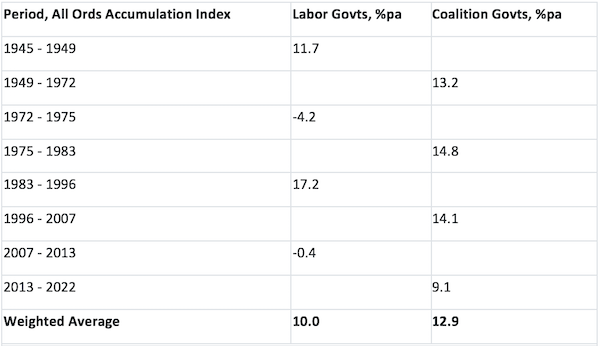 For the Australian dollar since 1983 the average post-election response has been sideways to down slightly, but nothing to get excited about.

Implications for investment markets this time around

Labor’s macro policies not being significantly different from the Coalition’s and its victory not being a surprise suggests that the market reaction to the new Government will be minor and that investment markets will quickly move on to other things. So far that seems to be the case. With the share market down 3.5% over the last 8 weeks there is potential for a rebound ahead as political uncertainty is reduced but the Australian share market remains vulnerable to ongoing global concerns about inflation, interest rates and recession and these will likely dominate.

While its now looking like Labor will be able to govern in its own right, the main risk for markets may come if that proves not to be the case and it has to rely on the Greens to form Government and they push the new Government down a far less business-friendly path, such as implementation of the Greens’ proposed super profits tax. However, even if Labor doesn’t secure a majority there will be plenty of “teal” independents in Parliament whose policies on climate, integrity and health align closely with Labor and for whom Labor should be able to gain support from. Labor’s (and the “teals”) desire to be more than a one term wonder should work against the new Government moving too far to the left on economic policies.

The change in Government has no implications on our growth, inflation and interest rate forecasts for this year. We continue to see the RBA raising the cash rate at is June meeting by 0.4% and increasing it to 1.5-2% by year end.

Following the election there will no doubt be lots more political analysis, particularly in relation to the driving out of moderates from the LNP pushing it to the right & threatening the Coalition. More broadly, it seems that the election result represented a rejection of more right-wing/conservative views on climate, gender equity, health and integrity in support for what one of the new “teal” independent House of Reps members refers to as the “sensible centre”. Just as the 2019 election result represented a rejection of more left-wing tax and spend policies in favour of the “sensible centre”. In this sense it may be seen as a good thing for sensible centrist policy making in Australia.